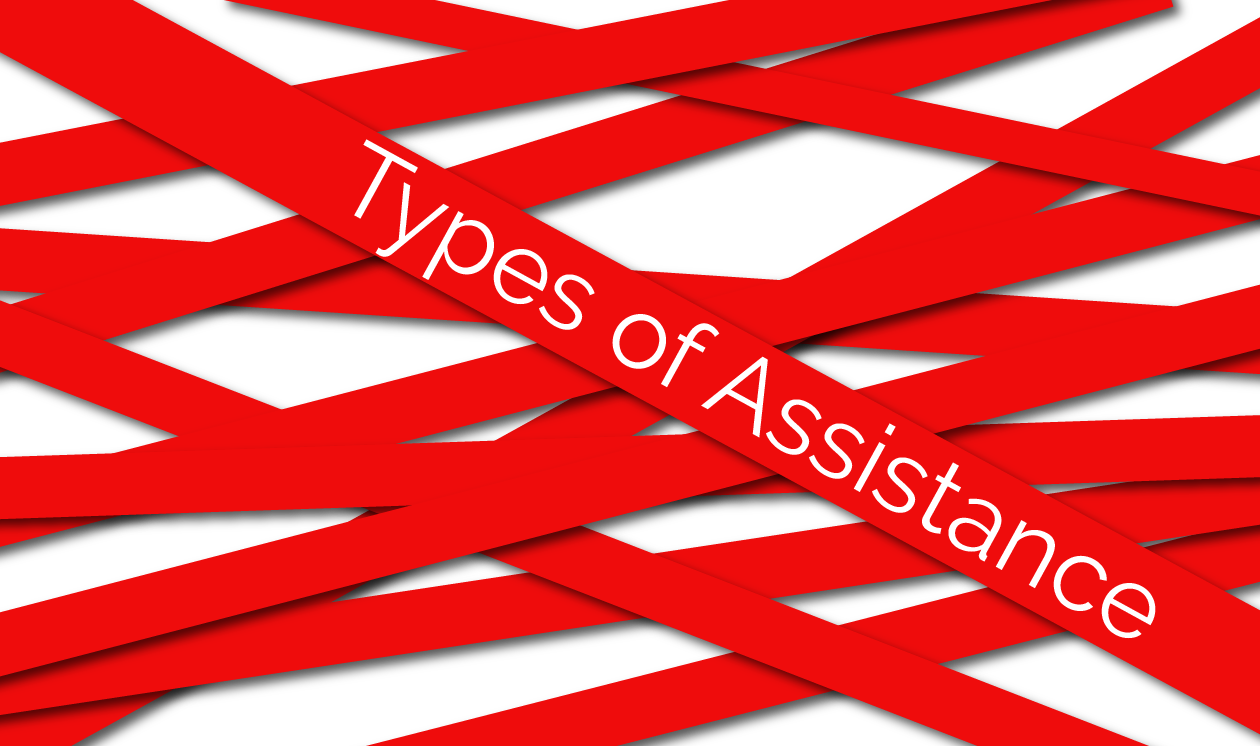 Know Your Type of Assistance

With so much changing come July 1 with Kentucky’s Medicaid program, one major change has flown under the radar. A Medicaid member’s “type of assistance” or “TOA” is about to matter. A lot. I’ve wracked my brain attempting to present this particular reel of red tape in a sexy, exciting way. I have failed. Nothing makes the “snooze alert” go off faster than saying the words “type of assistance.” And why should it? Until Kentucky HEALTH, Kentucky’s 1115 Medicaid waiver set to go into effect July 1, it didn’t really matter to most Medicaid members; everyone has received the same benefits. “Type of assistance” is the key in determining what benefits Medicaid will cover under the waiver, and it will be one of the more confusing and frustrating elements of Kentucky HEALTH, especially for low-income parents. So it’s worth taking a deep dive into this oh-so-exciting subject. And I should mention that we’re only talking about adults here…kids’ benefit packages won’t change.

Some background may be helpful to understand why this is important. There are several categories of Medicaid members (truth be told, there are MANY categories, but we’ll discuss just a few of them here). Currently, “category” doesn’t really matter to the individual member because everybody gets the same benefit package. It’s important for the state agency to know a member’s category for federal reporting purposes, the match rate (how much the state kicks in vs. the federal government), and other sundry reasons. For the technocrats out there (I can use that word because I was one my whole career, right?), I realize there are other categories, but I’m sticking with the ones that impact benefit packages in the New Medicaid Order of things.

Some parents and caretakers are eligible based on limits for the—wait for it—parents and caretaker category. This is a VERY low-income scale; about $4,280 per year (yes, that’s year, not month!) for a household of 2, or $6,230 annually for a household of four. This scale (not directly tied to the Federal Poverty Level scale, or FPL) is roughly 24%-28% of FPL, a quarter of what the federal government considers to be “poverty.” See the income scale copied below for convenience. Parents were able to receive Medicaid under this category prior to expansion in 2014. Also prior to expansion, parents could have become Medicaid members if their income fell within the more generous—up to 55%-ish of FPL—AFDC/TANF income scales (remember that program?), but that doesn’t appear to be a factor in Kentucky HEALTH, making this statement a little misleading: 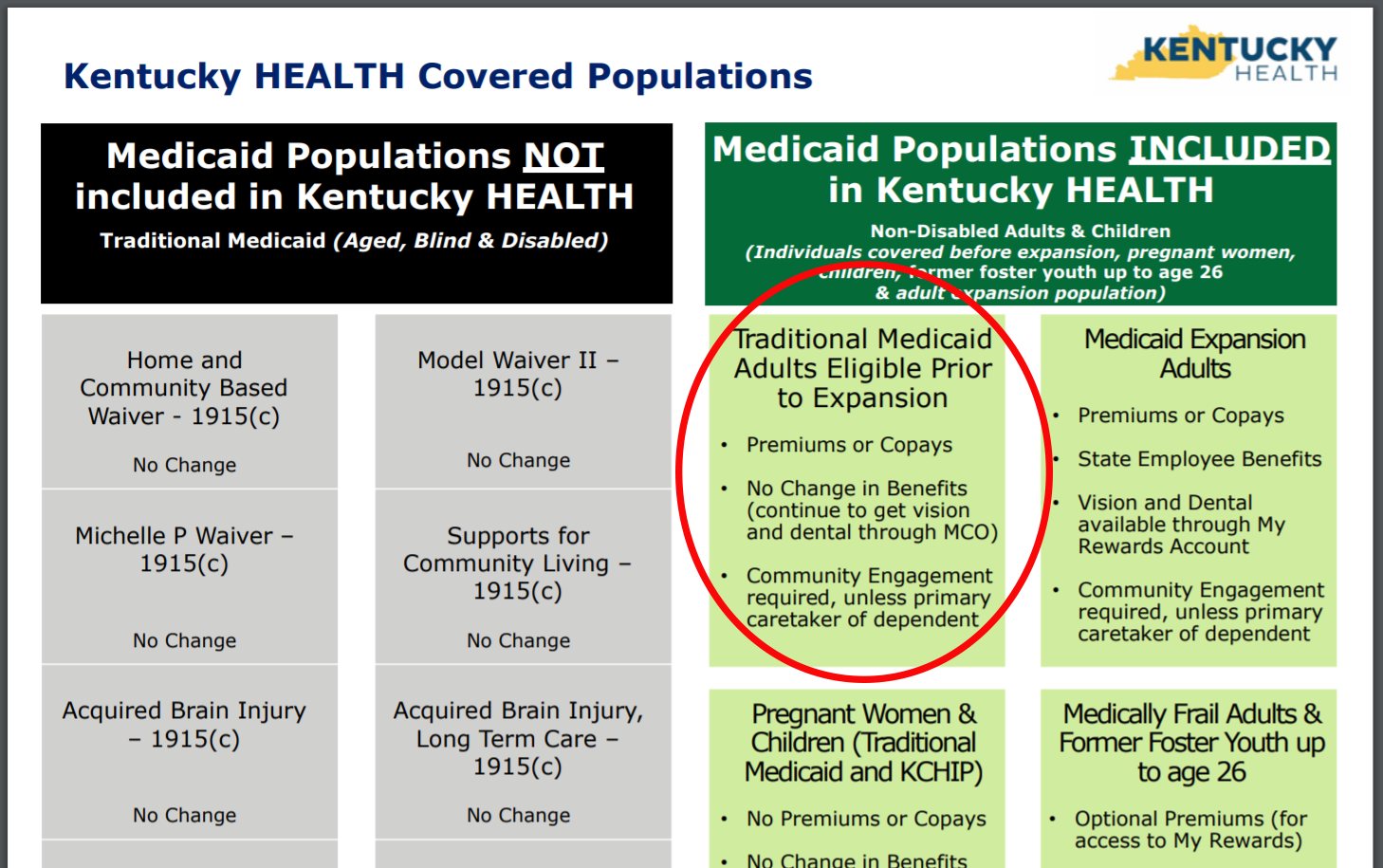 This group of very low-income parents shall be called “PACA” for the remainder of this piece.

With the advent of the Affordable Care Act and Kentucky’s decision to expand Medicaid in 2014, a new category was created not just for parents over the ridiculously low-income levels mentioned above, but for any adult whose income was under 138% of the Federal Poverty Level. These “Low Income Adults” (a Medicaid term) will be called “ADLT” for the remainder of this piece.

So, in the pre-waiver world, someone who is PACA may increase their income and be eligible under a different type, like ADLT, but it wouldn’t matter to the member because the benefits are the same all the way up to 138% of FPL. As with anything in government, there are always ifs, ands, and buts, but (see?) this is generally how it works.

So…What ARE the Benefit Types?

There are two types of benefits under this waiver. Stay with me here. The first is the “State Plan,” which includes everything currently included in Medicaid, including dental, vision, and non-emergency medical transportation (you know…the only way some Medicaid members can get to their doctor). The second is what’s called the “Alternative Benefit Plan”, which is supposedly modeled after the state employee insurance plan. Confused yet? Anyway, under this alternate plan, dental, vision, and transportation benefits are taken away. Members in this plan can earn virtual “dollars” in a “My Rewards” account to “buy” dental and vision services, but we’re not sure yet how they’ll get there…there’s no way to earn that transportation service back.

Who is Under Which Plan?

Let’s start with the easier group here…ADLTs with no kids. Most of these folks will be placed in the Alternative Benefit Plan regardless of income—from 0% to 138% of FPL. The only ones who WON’T be in this plan? Those considered “medically frail” (see the first installment), former foster youth who aged out of any state’s foster care system (only up to age 26), and pregnant women. Oh wait…another exception: any Medicaid member under the age of 21 is eligible for Early and Periodic Screening, Diagnosis and Treatment (EPSDT) services, so they WILL still have access to dental and vision services. Yes, this is still the less complicated group. Next, let’s move on to parents.

For parents at the lower end of the income scale, this is a trickier calculus. Those categorized as PACA—whose income is under that extremely low income scale—will maintain benefits in the State Plan. A parent whose income is over that scale will be moved to the ADLT category, triggering a change to the Alternative Benefit Plan. What about that AFDC/TANF scale? Not being used here. BUT, there is a thing called Transitional Medical Assistance, or TMA. When I was a caseworker, TMA was for people transitioning off cash assistance because their earnings increased above those income thresholds (this was the 90’s, y’all—when dinosaurs roamed the earth). It provided up to a year of extended Medicaid coverage during this important time. TMA for PACA parents works much the same way. If a PACA parent has increased earnings (key word) that would move them from PACA to ADLT territory, they could be eligible for TMA a minimum of 6 months, and maybe up to a year. During this TMA period, the individual keeps their State Plan benefits AND the income limit goes up to 185% FPL.

Let’s pause here and take a moment to think about that. Say Parent 1 makes only 20% of the FPL and starts working at a job that moves her family up to 180% of the FPL. She can keep her benefits—all of them—for up to a year because of a program that recognizes that this transition period can be a time of vulnerability with a need for full coverage to fill in any gaps. Meanwhile, Parent 2 makes 30% of poverty and automatically starts out in the Alternative Benefit Plan, where she stays until her income reaches 138%, at which time she is no longer eligible for anything. We’re happy for Parent 1, of course, but shouldn’t we be just as concerned about Parent 2?

And of course, income, as in life, doesn’t always move in an ever-upward arc. The ebbs and flows of a family’s income and household situations will inevitably move some back and forth between income scales and benefit types. Notices to members and computer screens at the doctor’s office are supposed to be updated with the latest benefit type. Regardless, this will be confusing not only for the member, but for their providers as well. We’ve worried about churn on and off Medicaid under this waiver, but now we also need to worry about churn between one type of benefit and another. We also must wonder if this could create the unintended consequence of demotivating individuals from increasing their income.

Lastly, I must stress that this entire piece is just about the benefit package, and not about other parts of the KentuckyHEALTH grand experiment. Premiums? Parents and adults of all income levels will have to pay them unless pregnant, medically frail, or a former foster youth. The work program? It will apply, too, unless there’s an exemption. Income level alone does not change premium or work requirements.

Had enough? Yeah, me too. It reminds me too much of the episode of “Friends” where Joey is practicing for the role of a game-show host. The game is crazy with completely nonsensical twists and turns, and Chandler probably says it best when he exclaims “This game makes no sense!” Fittingly, the game is called “Bamboozled.” We can only hope Kentucky families won’t end up “bamboozled” by Kentucky HEALTH.

That Scale I Promised: 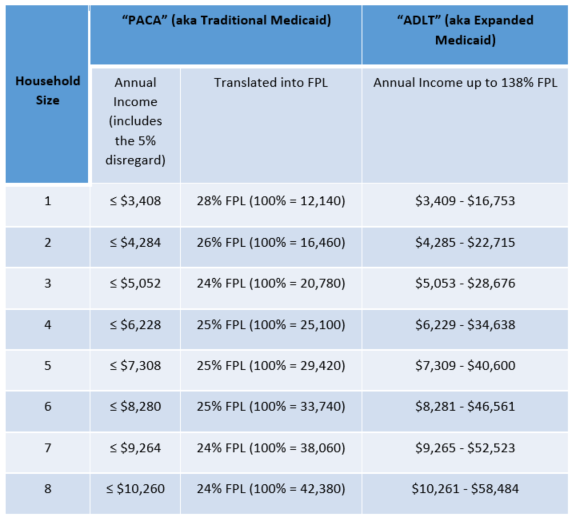 Information presented in this blog is correct at the time published based on KVH’s collective understanding of the waiver’s requirements through Cabinet presentations and responses to questions. These are subject to change at any time, since there are not yet any guiding policies or procedures, such as state regulations. We will update this information as needed, but until then, as Richard Marx used to sing, “it don’t mean nothing ‘til you sign it on the dotted line.”