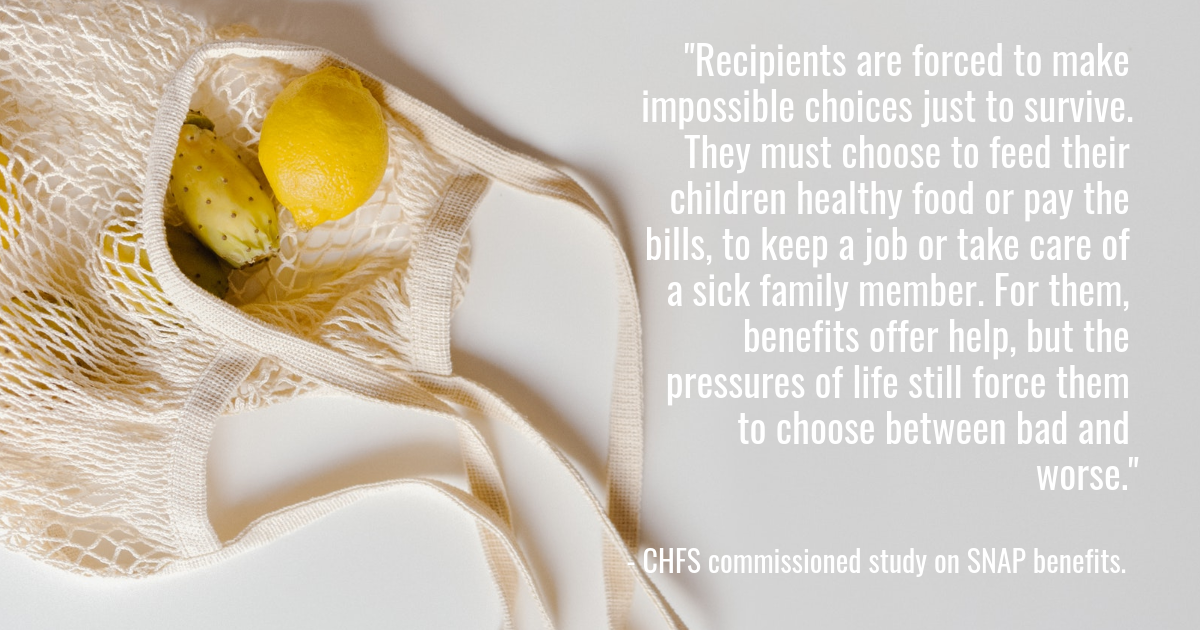 Food assistance through the SNAP program has been getting harder for some low-income Kentuckians to access over the past year because of new work reporting requirements. The evidence that this policy isn’t working comes from a surprising source: the recipients and workers closest to the program. Thankfully, there are ways to provide quality services to support workers’ reentry into the workforce without threatening access to vital benefits. Over the last year or so, our messaging on the following points has remained consistent because they’re all factors that impact the health and food security of low-income Kentuckians:

There are too many bureaucratic barriers to getting and keeping benefits.
Mandatory work reporting requirements create additional hurdles and deny people the help they need.
Many low-income Kentuckians lack access to the technology required to meet complex work reporting and other requirements.
Case management and eligibility systems can be difficult to work through.
The minimum wage—or worker wages in general—needs to increase.

This is especially frustrating when, despite this environment, Kentucky’s current administration is choosing to add more and more unnecessary requirements.

But it’s always good to find like-minded partners who can help get the word out on our messages, especially when they can elevate the voices of those most deeply involved. State case workers, agencies that partner with state government, and, most importantly, recipients of assistance all have important things to say about how things are working—or not working—within the systems and policies governing the state’s safety net.

That’s why I was so thankful to find a new ally in helping get these messages out: Kentucky’s current administration. It’s true. –

I’ve transcribed each of these boards. Reading through them, some themes begin to emerge: lack of access to new technologies, low wages, and the ineffective nature of work reporting requirements in general are loud and clear. Some of these cannot be addressed by the agency. Some of the issues are systemic and will take a dedication of time, resources and training to fix. And some of them can be fixed tomorrow.

The primary fix that can happen tomorrow? Reinstate waivers to the SNAP work reporting requirements in every county possible. These posters make it abundantly clear why it isn’t working and has led to so many disqualifications. Poor communication, training, and technology, as well as the confusing roles of DCBS and its partners and the lack of supports like transportation—all are well-documented here. 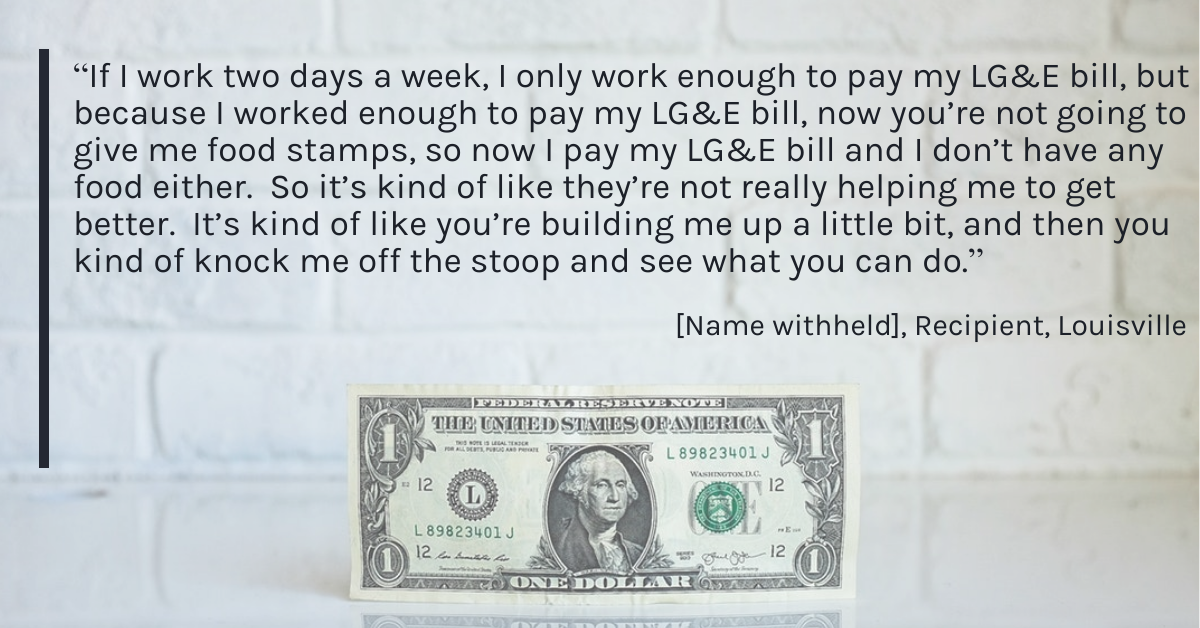 I’ll spend some time talking about technology. Kentucky’s new “Citizen Connect” system is touted by the administration as one of the key reasons Kentucky’s Medicaid work program would be different. We wouldn’t be plagued by similar disenrollment numbers as Arkansas because this well-thought-out online system is better than their hastily-put-together system, according to the Cabinet. From the poster “Who Owns Bob” (which is unfortunately titled; it should say “Who is Responsible for Bob’s Case”): “Not only is Citizen Connect difficult to use, for some it is nearly impossible because they lack access to basic technology. Many recipients don’t own the necessary tools to engage online in the way that it requires—especially when it comes to uploading documents [the primary way beneficiaries are required to verify compliance].” As for the option of getting to the library to access its technology? “…Getting access to a public library requires time and transportation which can be in short supply.” One partner put it this way: “…trying to tell them to sign in to Citizen Connect by yourself and upload your documents by yourself can kinda be overwhelming.”

A lack of communication often injects new tripwires into the work reporting requirement. One DCBS worker said, “We used to [send] a conciliation letter [a kind of warning letter prior to disqualification]”, but now, “…most clients don’t know that they have three [noncompliant] months, until their benefits are discontinued.” Another worker, talking about their training for the work reporting requirements, said “The instructors never made it through the entire [training materials] …I feel like I am punching a button because I am told to punch a button.”

But maybe the most telling comment comes from a partner in Owensboro: “We update the case managers in the state that ‘so-and-so’ is participating and making their 20 hours because they only care about participation.” This is an inherent flaw found in ineffective work programs that mandate completion and reporting of a certain number of hours of activity, especially on a large scale. Rather than setting up a program with individualized and fully supported activities, these programs require a set minimum number of hours with little or no support for a narrow set of approved activities.

Put all these pieces together, and the outcome is 20,000 people without food assistance. So far.

It can be different. A demonstration project called Paths 2 Promise in eight Southeastern Kentucky counties for a broader range of SNAP recipients ends in July of this year. Paths 2 Promise offered robust supports like childcare and transportation, access to paid education and training, and much more. This program was provided on a voluntary basis and offered employment-related services that helped many SNAP recipients. A fuller evaluation will be forthcoming, but you can hear about some of the supports and success stories here:

Kentucky doesn’t have to wait for another Federally funded demonstration project, though; we can do what so many other states have done before. We can develop strategic partnerships with education and training providers to draw down currently available Federal dollars to offer training programs that have built-in supports. Several states have adopted this model. It allows states to offer more supports to a wider range of SNAP recipients (not just the childless adults currently targeted in Kentucky) and can do so voluntarily, meeting people where they are, and not the other way around. This was the path Kentucky was on before this administration. It may still be in the works, but it’s likely been slowed down in the rush to mandate work reporting requirements for a narrower population across the entire state.

Other posters highlight important issues like low wages, the realities of people living below the poverty line, and the difficulties people have with Kentucky’s current eligibility system. All of them are worth a read for anyone interested in how this system works. Or doesn’t, as the case may be.

There is much work to be done, and hopefully these realities, now that the administration has committed time and resources to finding them, will be addressed in a positive way. As one focus group participant—a recipient—put it: “You can work really hard and still be really poor. And it sucks.” Kentucky shouldn’t continue an ineffective work program that makes life harder for the people it’s supposed to help. 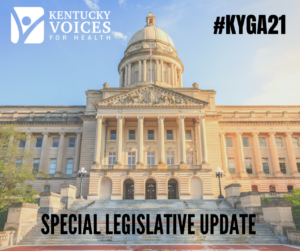 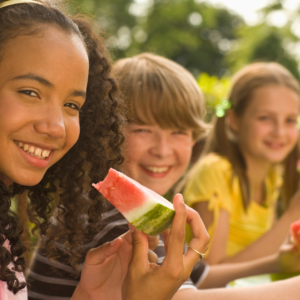