Following a federal court order to send Kentucky’s proposed barriers to Medicaid back to the Department of Health and Human Services (HHS), a 30 day comment period was held during which time 11,561 comments were submitted. Of those comments, 9,397 were unique and overwhelmingly unsupportive of the proposed Medicaid changes, known as an 1115 waiver. Of those comments expressing a clear opinion on the waiver, 8,438 or 96 percent were unsupportive while only 373 or 4 percent were supportive, as shown in the graph below – a ratio of over 20 to 1 against the waiver. 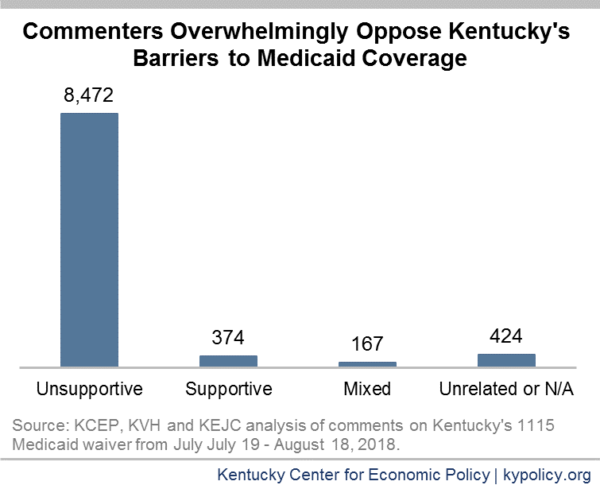 The court ruling that precipitated this public comment period stated that the administrative record, including the state’s estimate of coverage losses, was not adequately considered – rendering the approval “arbitrary and capricious.” The result of this comment period is a remarkably substantive documentation of the harms the proposed changes would cause, from both individuals that would be affected and experts who provided extensive research. The secretary of HHS will now have to adequately consider all of it, and “provide more than ‘conclusory statements’ to prove he ‘considered [the relevant] priorities’” according to the opinion. In this instance, the relevant priority is furnishing medical assistance, and not taking it away.